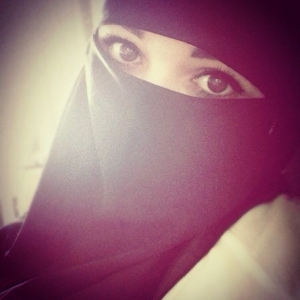 Many ‘scholars’ strongly advise that a Muslim woman should cover her face. It is apparently ‘highly recommended’ as the face is a cause for initial attraction. What this connotes is that she is somehow responsible for awakening in men the desires which may lead them astray.

We’re going to have a look at some of the evidence popularly used to claim Muslim women should cover their faces.

1. Sahih Bukhari has this hadith:

Narrated ‘Aisha that Allah’s Prophet used to offer the Fajr prayer and some believing women covered with their woollen sheets, used to attend the Fajr prayer with him and then they would return to their homes unrecognized.

These ‘scholars’ argue that because the women were unrecognisable, it must be because their faces were covered by their sheets.

There are in fact, several versions of the same hadith (found in Bukhari, Muslim, An Nisa’i and Abu Dawud). In the collection of Bukhari itself, another version of the hadith is as follows;

The meaning of this version is the same as the one I posted first EXCEPT for a tiny addition. This version gives the REASON the women were unrecognisable. The word on the end ‘ghuls’ means ‘darkness’. People could not recognise the women due to DARKNESS and not because they had their faces covered.

Interestingly, although there are a number of ahadith which include the reason (ie. because it was dark’), it is the version which doesn’t that is used most often.

2. This hadith is from Bukhari also:

Aisha (the wife of the Prophet) said, ‘May Allah have mercy upon the early emigrant women; when ‘And draw your scarves over your necklines’ (Surah An Noor, verse 31) was revealed, they took their ‘muruut’, tore them, and made covers of them.’

This hadeeth is usually translated INCORRECTLY with ‘fakhtamarna biha’ as ‘ covered their faces’  instead of ‘made covers of them’. The verb here ‘fakhtamarna’ (in bold) is from the same root as ‘khimaar’. Although ‘khimaar’ is now used to mean ‘headscarf’, it actually just means ‘cover’. It has certainly never been used linguistically to refer to a covering of the face. In fact men in the Middle East also wear a khimaar and it does not cover the face.

3. Most translations of verse 31 of surah an Noor read like this – ‘And tell the believing women to lower their gaze (from looking at forbidden things), and preserve their private parts and not to show off their adornment except only that which is apparent (like palms of hands or one eye or both eyes for necessity to see the way).

The words in brackets will be understood by many who do not understand the Quran in its original Arabic as the words of the Almighty. Consequently, women may feel that they have no choice and that their faces and hands should be covered as well as their bodies.

However, the words in brackets are NOT a part of the Quran but are the incorrect understanding of the translator and actually contradict other evidence from the Quran and Sunnah.

4. The collection of Abu Dawood has this statement from Aisha, the wife of the Prophet:

Narrated Aisha, “The riders would pass us while we were in ihram with the Messenger of Allah. When they got close to us, one of us would draw her jilbaab from her head over her face. When they passed by, we would uncover our faces.

This account, however, contradicts the following hadith from Bukhari:

The Prophet (pbuh) is reported to have said, “The woman in the state of Ihram should not cover her face, or wear gloves.”

How can it be that the wives of the Prophet covered their faces in ihram when he clearly stated that a woman should not cover her face or hands and he was with them at this time? Obviously there is a problem with the authenticity of Abu Dawud’s account (The collection of Abu Dawud is deemed less authentic compared to Bukhari). So, we cannot use the account attributed to A’isha as credible evidence.

Some argue that this Hadith in Bukhari means women did cover their faces normally. However, by that same token, would these same ‘scholars’ claim that when Muslims were told in the Quran not to approach the prayer while intoxicated (4.43), it meant they were usually drunk? Of course not!

I am sure you’ll agree there is a clear pattern emerging here. A significant proportion of the clergy, despite the evidence stating the opposite, feel strongly that women should cover their faces. The question we must ask is ‘why?’.

I believe it is due to two reasons; Firstly, the Muslim clergy spend decades studying the OPINIONS of those before them while they should be looking at the primary sources of the Quran and Sunnah. Secondly, many of these interpretations are founded in culture: cultures which are known for subjugating women, removing them from the public sphere, and placing the responsibility of morality upon their shoulders.

The evidence speaks for itself if we look with our own eyes and judge with our own intellects. Muslim women should never be faceless. Their presence, their contribution, and their value to society is paramount. Even more importantly, we must follow the religion, not mere opinions.

One thought on “THE FACELESS MUSLIM WOMAN”